In this winter 2013-2014 edition of the Tranamedia Watch Asia I’ll be talking about industry news on Getty Image’s latest marketing campaign, the launch of Singapore’s transmedia community as well as the business model of experiential storytelling and a viral marketing ghost stunt.

In early 2013 Getty Images was the only major brand in Asia that understood the potential of transmedia and incorporated it into its own business model. A bold new marketing campaign put transmedia storytelling creation in the spotlight. After an interactive installation at Cannes Lions 2013 Getty offered its diverse content library is the ideal starting point for every transmedia creator or brand that wants to explore different ways of reaching out to their clientele. Supporting this campaign Getty started extensive education and advocacy efforts. Its Transmedia Storytelling in 5 Steps infographic made quite the rounds on social media and industry blogs. The company also offered corporate training sessions for their own clients. Another bold step was to actively support Asian media festivals. Getty was one of the main sponsors for the Hong Kong Webfest, which was also used as staring point for the transmedia campaign print distribution. The festival received the first batch of Getty’s photo packets, which are a mosaic like image collection that reacts with the Aurasma app to present video content overlays on smart phones. Elvira Lodewick, Getty’s APAC marketing director, the brain behind this entire initiative, also conducted a creative lab at the Spikes Asia conference in Singapore where transmedia concepts for marketing strategies were prime. 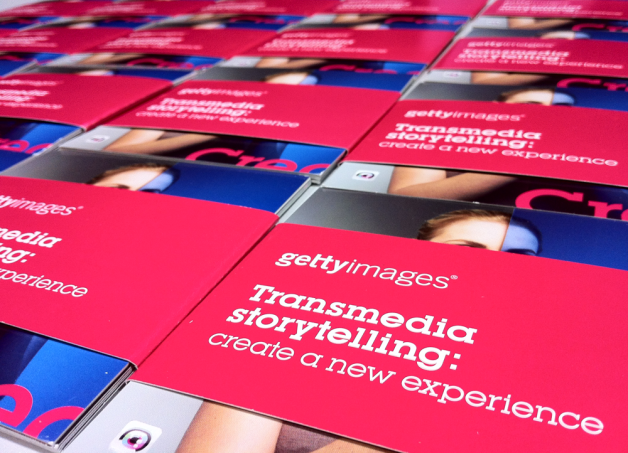 However, following an internal restructuring process in November 2013, Lodewick, who was the primary driver behind this campaign, left Getty and all transmedia efforts were subsequently shut down. Getty’s impact were just about to take up speed and tremendously helped convincing other Asian brands to take a shot at transmedia. The sudden conclusion of this campaign will hopefully be of temporary nature only and not send the wrong signals to the market.

In Janaury 2014, Haexagon Concepts launched the Singapore Transmedia Meetup. This bi-monthly event series will bring together like-minded content creators and industry experts from entertainment, advertising and media technology. With a constantly changing schedule of speakers, talks, project presentations, pitching and idea exchange sessions the meetup aims to build and nurture a strong local creators community while advocating the concepts of transmedia.

Upcoming events will tackle topics like experiential storytelling, location based transmedia experiences, content marketing and the focus on customer relationship building via storytelling. To check out latest events and discussion sign up as a member here: http://j.mp/SGTMMU

The meetups are supported by the Transmedia Alliance and venue sponsored by AV8 Media.

“Freeing HK provides the first room escape game in Hong Kong, furnishing Hong Kong people with an unprecedented entertainments. Apart from the sophisticatedly designed rooms, the delicate scenarios involved enable players to imitate the roles in movie stories. You have to find the hints to solve the riddle and escape from the room within the limited time, or you will have to bear an inconceivable aftermath!”

A modern treasure hunt so to speak. Participants voluntarily get locked up in a small room and need to decipher hidden clues and stories in order to free themselves. Others have to master a dark Indiana Jones-like labyrinth. Each location is themed differently and the provider even offers seasonal challenges. The experience is mostly used for corporate training as team building exercise but also very popular amongst young adults who visit with their group of friends.

Tickets running fast every day and it is hard to get a free slot at some locations. In fact the concept is so popular, especially in 1st tier Chinese cities that new providers popping up within months. In Shanghai alone, there are about 100 providers operating a total of around 300 locations. Freeing HK itself expanded quickly during the past 18 months, now running 5 outlets in Hong Kong as well as franchised to Singapore, Guangzhou and Macau.

Freeing HK offers two language versions, Chinese and English, depending on location and experience. The business model is accompanied by a spin-off called Mr. Escape which also comes as mobile app and got certain features of a reality game. Overall, it functions as marketing tool as well as experience extension.

Just recently this slightly aged Singaporean project came to my attention while talking to one of the creators. The Raffles Place Ghost campaign for a local HR agency made quite some media waves back in 2008. The case study video below gives a good insight in strategy and structure of the campaign. The video was professionally seeded with a decent budget and hence gained a certain viral effect at some point. Quickly spinning out of control, the agency behind the project had to claim ownership after just 1 week online. Planned was a period of 1 month. What added to the viral factor was a smart setup with fictional characters (ghost hunters) that started online discussions and countless fact submissions by “fans”.